Tonight was the last class of the 8 week SC Certified Beginner Beekeeper Course. It was a great experience! I’m so grateful to have had the chance to learn so much from the beekeepers of the Oconee County Beekeepers Association-South Carolina !

Each class was about 2.5 hours long and we had the opportunity to ask so many questions, along with all of the course materials it was a great way to gain both knowledge and confidence about getting started with bees.

I know a lot of people these days are resorting to online courses and I can’t speak enough to the value of having an in-person class.

Enjoy these photos from our hive inspection class this evening. Kind of hard to take photos wearing gloves, but for now I will be suited and gloved up until I’ve got more experience and confidence.

177 days until my bees arrive! I’ve ordered three Carniolan/Italian NUCs from HoneyStrong in Smyrna, SC. I ordered through them rather than more locally because I wanted NUCs, I wanted Carniolan genetics in the mix, and I wanted to make sure I didn’t miss out on bees- places more local than me seemed to be more risk of sellout, and didn’t have the mixed genetics.

Over the last few months, I’ve seen a major surge of interest in Kunekune pigs and what we have available. Most of the inquiries have just been informational, from folks not quite ready to add pigs, but curious about it due to a desire to have their own pork (that’s a pleasure to raise). Our goal is to produce more pork producing breeders.

Some have been pet-related, from folks interested in making quarantine a bit less lonely. This isn’t the optimal time to add a pet pig, however. Not to mention that as pork producers working to conserve this fine breed, we aren’t in the pet pig market.

First, I don’t recommend starting with a single pig. Kunekune pigs are highly social, herd animals. They need to be with their kind. Other pets or barnyard friends won’t cut it.

Second, a young breeding pair raised together from piglet age will often not breed. There’s numerous reasons why. Young piglets raised together often develop a brother/sister relationship and don’t see each other as mates. Young males sometimes need to observe other males breeding, or be able to participate in “horsing around” with other males, and play breeding- mounting one another, engaging and interacting. They’re often fine with a barrow with which they can interact with. Sometimes a young male will need another male around to inspire rivalry, sometimes not. When we had our first sows, we had no older boar, and our first was very young. No one was getting pregnant. When we brought a more mature boar to the farm, the females came into heat almost immediately and displayed obvious signs of it. There was no guessing.

So, what is the absolute best way to start off with the breed?

Sometimes, it’s as simple as starting off with barrows- whether you raise them as meat, or you just keep them as barnyard mascots, they give you experience in learning about pigs. Their care, feeding, health, behavior, etc! A barrow is a castrated male, by the way.

Another option is a barrow and an intact female.

But if piglets are your goal, whether for potential future breeding stock sales, or piglets to grow out for meat, you do need to explore a few possible scenarios for your best success.

Option 1: Two barrows, a boar and a gilt. Separate them all at six months, housing boar/barrow in one place and gilt/barrow in another. Keep them separate until ready to breed. (We always keep our boars and females separate)

Option 2: One barrow, a boar and two gilts.

Most people new to kunekune pigs make the common mistake of trying to always house their pigs together. They don’t separate them. In these situations, time is lost because they have to separate pigs, add new pigs, or just end up giving up altogether. Always separate males and females when they’re not breeding. 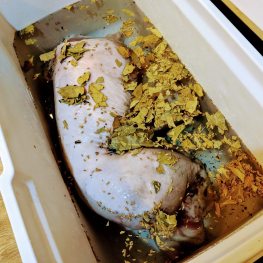 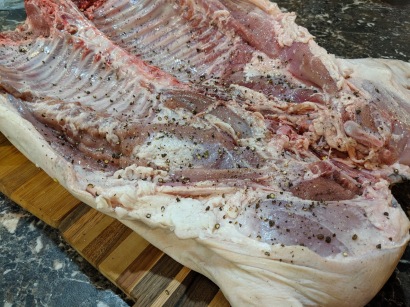 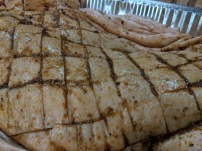 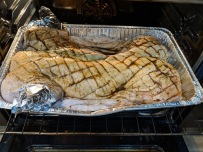 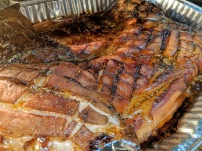 This preparation was a “suckling pig” sized oven roaster prepared October 2018. I say “suckling pig” because this is a small roaster pig, approximately the size at which a regular farm breed suckling pig would be around weaning. In this case, it was an older Kunekune piglet, about 4 months old. The hanging weight for this roast was 18 lbs. This is about the largest size that could comfortably be done in the oven, unless of course you halved the roaster and did one half in two pans on two oven shelves.

This roaster was brined in my usual brine recipe (Sea salt, bay leaves, fennel, star anise, juniper berries), then liberally salted and peppered and rubbed with my sweet & spicy rub (recipe here).  Skin was scored and the rub worked into the crevices.

This was slow-roasted at 200F for about 6-7 hours, approximately. The final result was a perfectly cooked, tender and falling-apart-at-the-bone oven roaster.

This roaster was enjoyed by folks at an AKPR Sanctioned picnic in October 2018.

Originally prepared for Easter 2019, we brought in a number of half and whole loins as a special holiday offering. This recipe features the entire primal cut loin section of a smaller pig.

We’ve brined the loin, then cut the loin in half, seasoned with a sea salt/black pepper/brown sugar/garam masala rub, and stuffed with apples, shallots, garlic, rosemary. The two loin sections are tied with cotton twine, rubbed with olive oil and pierced with cloves, and roasted at 325F for 20 minutes per pound.

The result? Perfection! This is a true statement centerpiece dish for any holiday meal or special occasion. This recipe was inspired by a half wrap roast prepared by Lonedove KuneKunes.

Each photo has a caption describing the process. 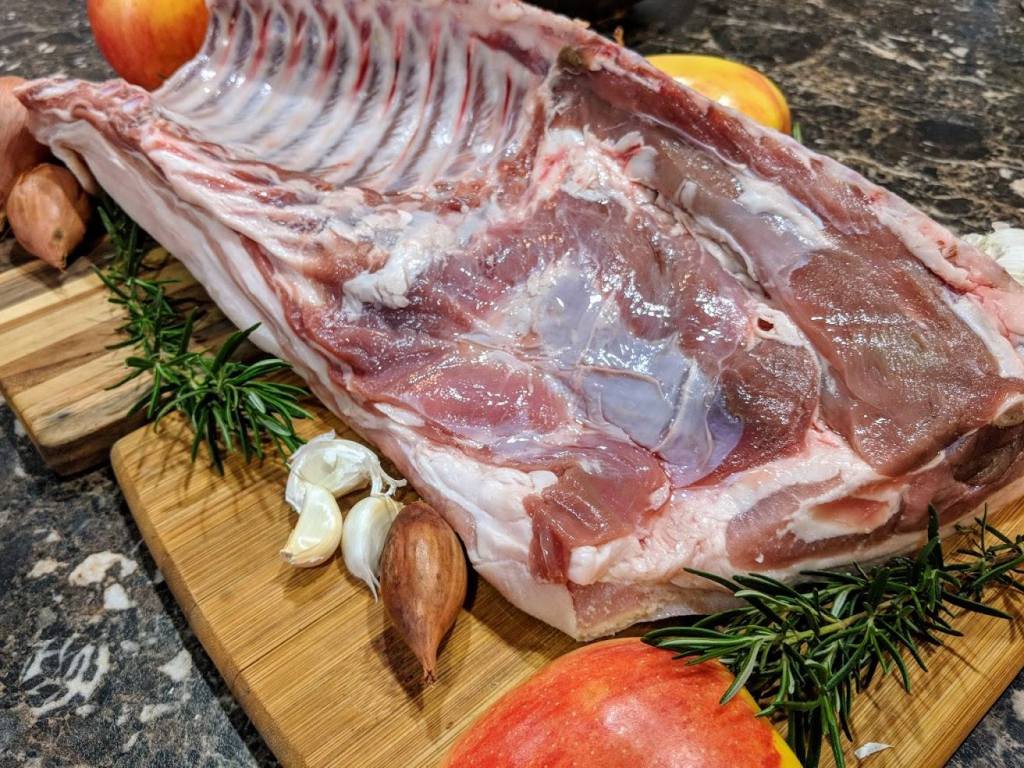 This post was written by Connor and originally appeared in his August 2016 4H blog.

Yesterday, my Mom and I rendered Lard for the first time using fatback from the two KuneKune boars we had processed.

Things you will need:

1. Cut the fatback up into smaller pieces to grind into shavings. (Make sure to cut off all the meat on the fatback) If you don’t have a grinder, you can cut it into shavings with a knife.

2. Grind or cut up the fatback into the small shavings. 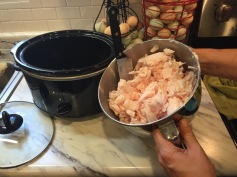 3. Add the 1/4 cup of water and the fatback into the slow cooker. Cook till the pieces of skin named cracklings in the lard are golden brown. 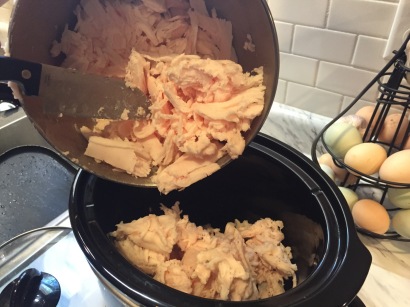 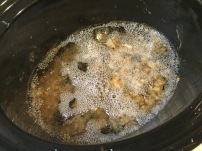 4. Separate the lard and the cracklings with cheesecloth and a strainer. Then pour the lard into a mason jar and let it cool off before putting it in the fridge. 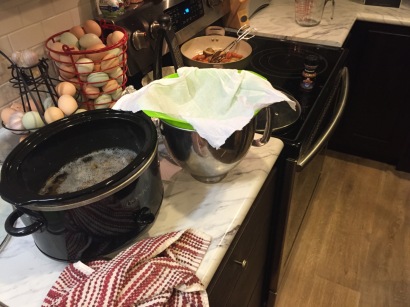 5. Fry the cracklings with the pork fat they are covered in and some salt. These are yummy toppings to put on salads and dishes.

The lard turned out to be a perfect snow white. For how much fatback we added to the crock pot I am thought there would be a lot more. At least it perfectly fit in the mason jar! We have leaf lard rendering right now it looks like it will fill two jars. I am very excited to cook and bake with lard for the first time. 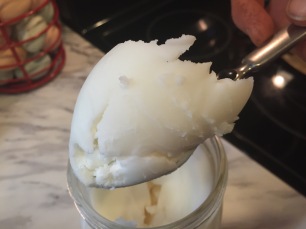 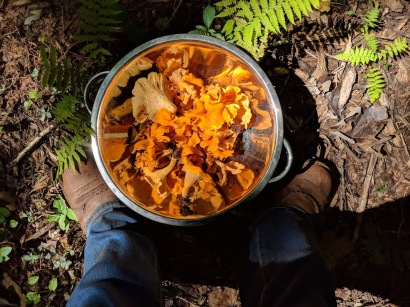 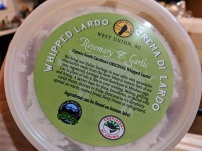 Sirloin chops, also known as sirloin steaks, are cut from the back section of the loin, in the hip area. With sirloin chops from lard breeds, tenderness is typically not an issue as long as the meat is properly cooked (i.e. not overcooked, it will still have pink color). In regular “bacon breeds” (pigs bred for leanness, low fat and more common pale color), these chops tend to be tougher and are best braised or slow cooked.

Again, with lard breed chops you needn’t worry- tenderness is built in thanks to the intramuscular marbling and overall fat quality.

I used some of our Rosemary & Garlic Whipped Lardo to prepare this meal. This is used in place of cooking fats, such as olive oil, in this case. It’s whipped pork fat with seasonings. To sear the chops I used the same method I’ve written about in this post: “How to cook a Heritage Pork Chop, featuring Kunekune Pork“, only when I put the chops into the oven to finish, I added a liberal dollop of whipped lardo to each chop. This melted, infusing the chops with flavor from the rosemary, garlic, sea salt, pepper and vinegar.

Fresh beans and farm-foraged chanterelles also enjoyed the same whipped lardo seasoning, although the flavoring was a bit heavy on the chanterelles. Butter or olive oil is best for those.

The final plating, a delicious and perfectly cooked sirloin chop with beans from our garden and chanterelles from our woods.

This recipe was originally shared on Facebook in July 2018.

How to cook a rare breed heritage pork chop! These are Kunekune chops… 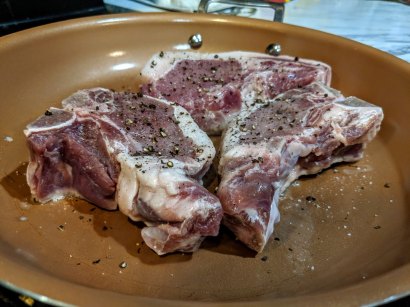 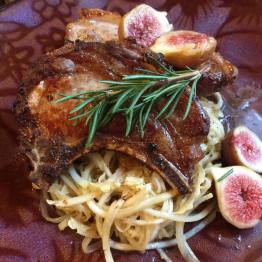 Liberally salt and pepper, sear on all sides in a hot pan. Add some Olive Oil or Corva Bella Farm Whipped Lardo and sear some more! Get sizzling!

Preheat oven to 450F, put your chops in a baking pan, add a little more whipped lardo on top (or butter or olive oil), cover with foil… and oven finish until your meat thermometer reads 135F.

Yes, the meat will still be pink on the inside. If it’s completely white, you overcooked. 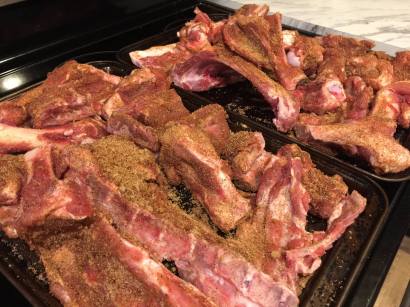 Last night we made roasted #kunekune pork bones. Let me tell you… this was quite possibly the most tasty and finger-licking good way to make use of these bones, ever! My son and I barely waited for them to cool, before we dug in and stood in front of the stove, gnawing the sweet & spicy seasoned morsels off the bone. It was incredible, and we’ll definitely be cooking up the rest of the bones this way.

This is a great way to cook ribs, in particular!

From the post I made last night: Whole Hog Eating — pork bones! We got two big bags of pork bones back from our recent processing, as the meat was all utilized for sausage making… so we had a lot of bones! And there is still meat on the bones, honestly several meals for us. Out comes a tasty dry rub, and a long, slow roast in the oven. After the meat is off, we can make pork stock with the bones. Nothing goes to waste!

The rub recipe is an adaptation of one I found online- adjusting some of the herbs and spices. I’m sharing my version of it, as I’ll most definitely be using this rub again!

We are working our way up to doing an oven roaster sized pig, but for now I’m experimenting with a few different recipes and techniques- utilizing a quartered oven roaster weighing about 4.25 lbs.
This first recipe was for slow cooked crispy pork shoulder, it roasted all day long at 250 F after being rubbed down on both sides with sea salt and cracked black pepper. Then back into the oven to crisp the skin at 500 F! This is the first time I’ve ever successfully achieved crispy pork skin on a roast, so I am pleased!
Check out the recipe, here: https://www.seriouseats.com/recipes/2011/12/ultra-crispy-slow-roasted-pork-shoulder-recipe.html
We *may* be able to offer oven roasters this holiday season, also commonly known as “suckling pig”, although our oven roasters will be 4-5 months old. Also known as “Porcelet” or “Maialino”
The deep red meat color and marbling is something that comes with age in our pigs. Younger pigs will always have paler meat! It is still incredibly tender, however!

This was prepared for Easter 2019, with variation on traditional porchetta recipes.

Wrapped and tied, on a bed of carrots, parsnips and shallots, decorated with more fresh herbs. 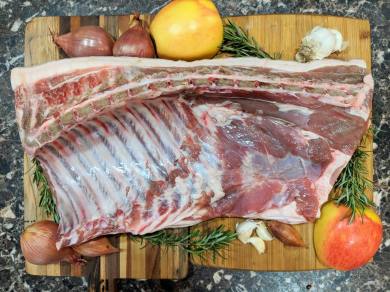 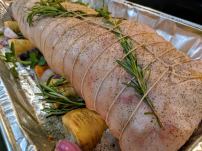 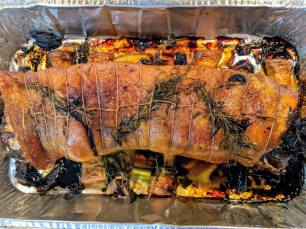