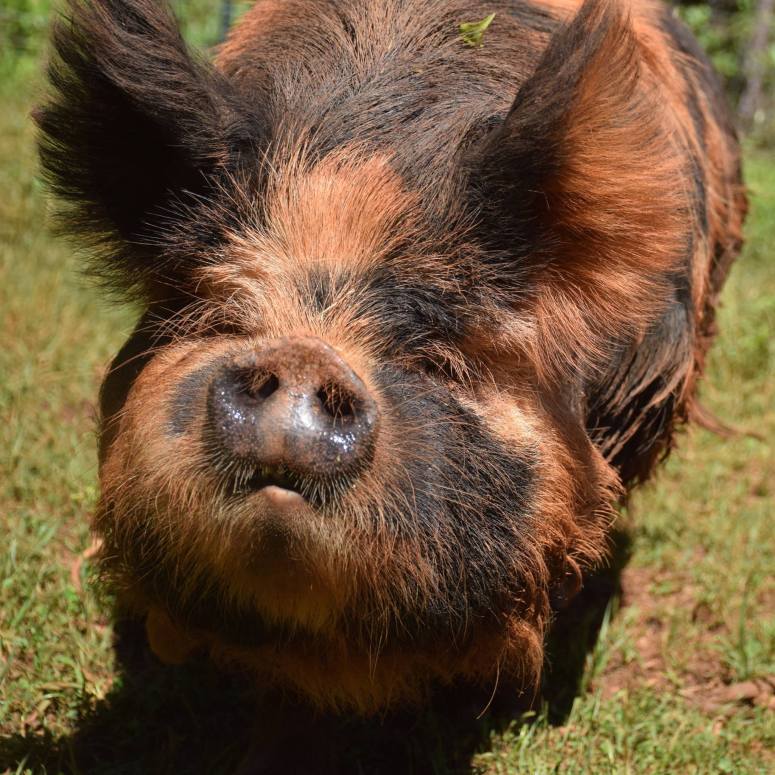 Let’s talk about COI in relation to breeding… COI = coefficient of inbreeding. In other words, the degree of relatedness that two pigs have. COI is just a number. It’s just a tool- one of many- that you might use when assessing a pig to add to your herd, or two pigs you want to breed together.
There’s a lot of confusion about COI and a lot of misconception that a low COI = a better quality pig. This is not a hard & fast rule and is especially confusing to those that are new to breeding and purchasing their first pigs. It can be overwhelming, and in a lot of cases, new buyers are probably passing up higher quality pigs left and right in favor of purchasing only those with low COI. The truth is that with COI, you have to look at the big picture. Not only all of your breeding pairs, but potentially the pairings of your pair’s offspring as well. Don’t exclude a pig based on COI alone.
Chickie, above- is an exceptional Jenny sow with wonderful conformation and type. She is the product of a line bred dam (with 35% COI) completely outcrossed to an unrelated sire with 0% COI. Her Grandparents were half siblings and cousins all at the same time. Chickie has a low 5.9% COI.

I’d rather have a pig with amazing conformation and a higher COI, than a pig with low COI that should have been a cull. Why? Because I can outcross that higher COI pig to a pig that is unrelated, and have low COI offspring. I can also cross a high COI pig to another high COI pig and end up with low COI offspring! But the low COI pig that is poor quality? It would take a few generations of breeding to improve that pig’s offspring, if it was even worth doing so in the first place. In that case, you’d have to consider other factors- such as, “is this pig a more rare bloodline that needs improvement and population?” or “does this pig have potential major faults that disqualify it from breeding?

Morgana, Chickie’s half sister, is an exceptional piglet who is line bred, and her COI is 26%. She will be outcrossed to a totally unrelated boar in the next generation, our Tutanekai, Lorenzo. He has an almost nonexistent COI of .4%- but it’s not just his COI that is appealing for Morgana, it is his conformation and color, as well. Here is her Morgana’s pedigree, so that you can see the common ancestors on dam/sire sides.

Why would we add a piglet to our herd with higher COI? Because we observed the consistent results that Morgan’s current owner had achieved through two litters of piglets, and we were very impressed by the offspring. These were piglets with exceptional growth rates, consistently strong conformation and type, and a body type well-suited to our pork production goals. Morgana’s genetics will be a valuable tool for us to work with.

At this time, the best pigs in our herd have higher COI’s, or were born out of one or both parents with higher COI’s (outcrossing). The truth is that a breed is both conserved AND maintained through a combination of line breeding and outcrossing. The key word here is MAINTAINED. When you breed two pigs together, you have chosen to breed those pigs for a variety of reasons. Hopefully, one of the reasons was because you chose traits in each one that you wanted to see expressed in future generations. When you line breed, you’re increasing the likelihood that certain traits will be expressed more consistently. On the flip side, you’re also increasing the likelihood that undesirable traits can appear, so you must be prepared to cull if need be (thankfully that is where a pork production program goes hand in hand with line breeding).
Again- breeding two higher COI pigs together doesn’t mean that the resulting offspring will have an even higher COI. In many cases, the COI will be lower, as in the case of Calliope (13.4% COI) and Giuseppe (14% COI). Their offspring would be a reasonable 9.9% COI, lower than both parents. Why? Because while both parents have higher COI, they are also less related when paired. It’s genetics. 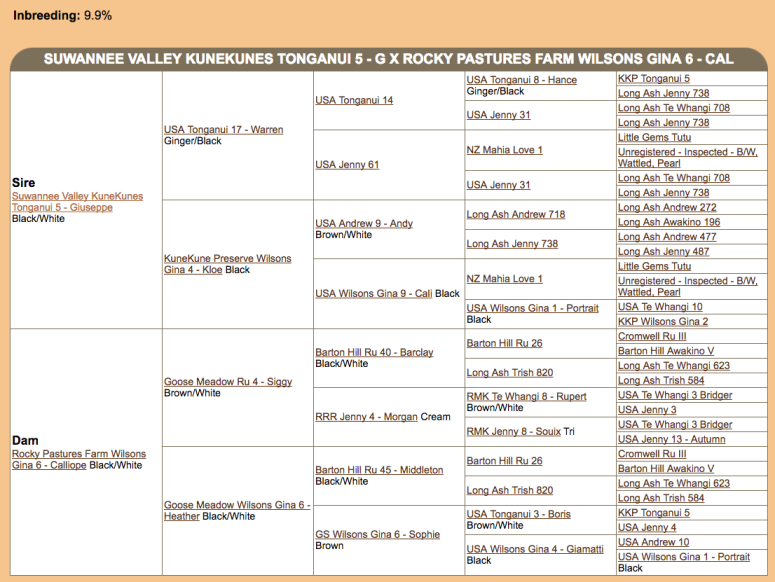 COI is not the end-all, be-all indicator of quality in a breeding pig. Consider it, but don’t let yourself be ruled by it. Look at the pedigrees, and look at the pigs that appear with greater frequency in a line-bred pedigree (especially the closer generations). Most importantly, look at the pig itself! Look at it’s conformation, and that of it’s dam and sire.